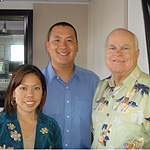 When Walter Dods Jr. took over as CEO, First Hawaiian Bank was the 10th largest in the state; when he retired 16 years later, it was the largest and most profitable company in Hawaii—doing this as a rare breed of marketing profiler who made it big in the banking industry.

Dods started his career as a mail boy at the then-called First National Bank of Hawaii. During this time, he was also on night shift at the University of Hawaii to accommodate his time to pay the bills. He graduated with a degree in Marketing major in Personal and Industrial Relations.

His brazen attitude towards life’s turbulences has become his primary weapon. He says, “My whole life I’ve always wanted to take on challenges that were larger than I was.” And what a challenge he has faced.

Dods spent 40 hours a week engaging in community-based activities. Topped with his corporate career, you could only wonder if he ever had time for leisure.

Greater Good Radio brings to you Walter Dods Jr. who, despite his busy schedule, has come to accommodate us and share his experiences during the forefront of his career and how he has become one of the most powerful men in Hawaii.

This interview will surely make you smile.