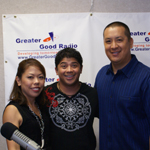 Augie Tulba is Hawaii’s very own comedian, actor and entertainer. Augie has won two Na Hoku Hanohano Awards and in 2002 was named “Comedian of the Year” by Midweek and the Honolulu Star Bulletin. He is the founder of Speak the Dream Foundation, which aims to provide scholarship to incoming college students.

Augie has been at the forefront of Hawaii comedy renaissance in the past years. His humor reflects his humble beginnings and the multicultural facet of the Islands and his style rings around sensitive issues like race, sex, politics, and stereotypes. Augie hosts his own radio and television show.

In this Greater Good Radio interview, Augie reveals the reasons behind his move to being a solo artist. He mentions that doing stand-up has always been his passion, and moving to a solo career would be the best way to follow his heart’s desire. Augie also talks about the various lessons he has learned running his own show. He says that, for an entertainer of his caliber, it is unequivocally essential to hire an accountant to check on finances, and a lawyer to protect from undesired fine lines on contracts.

“I think it’s important that you get somebody to always protect you and make sure that you’re on the level,” Augie mentions.

Listen to this interview and find out the different, untraditional ways that Augie promotes his shows. To him, promotion is crucial because he believes in his product and there is a market searching for what he offers—a good laugh.

Learn more about Augie Tulba and his community involvement only on Greater Good Radio.

BIO:
Augie Tulba (aka Augie T.) performs live on stage and on television for audiences here in the islands as well as across the United States. He was voted the funniest comic in Hawaii by Star Bulletin and Midweek and has been the core artist in the revival of the Hawaii comedy scene these past few years. Augie’s humble beginnings are the source of much of his comedy that rings tones of familiarity in everyone even if they are not from Hawaii.

He can be seen on television in various commercials and star of his own TV show on OC16 (THE AUGIE SHOW). He can be heard everyday on Q103 Maui , KMMK Molokai and THE SURF 95.9 on Kauai with one of the funniest radio shows in the market!

His popularity is matched only by his good heart and humble personality. He expresses a genuine concern for others and volunteers much of his time to help in the local community. Such notable causes he is affiliated with include: Easter Seals of Hawaii, Big Brothers and Big Sisters, The Weed and Seed Program and the Read to Me Programs. A dyslexic himself, Augie volunteers to reach out to students and give them hope that they too can overcome this condition. In addition to volunteering for various programs, Augie along with his wife started the “Speak the Dream Foundation” a scholarship program to help underprivileged kids with higher education.

With two Na Hoku Hano Hano Award winning albums, a Hawaii Music Award, an award for Favorite comedian from Honolulu Weekly, multiple television shows, a top rated radio show, sold out comedy shows here at home in the islands and all over the mainland, one of the recipients of the prestigious Pacific Business News “40 Under 40” award, the only comedian locally and nationally to sell out the Hawaii Theatre, 2 number one selling comedy DVD’s and voted best comedy show by Honolulu Magazine . Augie is one of the top entertainers in Hawaii that can draw ticket sales. He represents the “everyman” for the Hawaii Market.