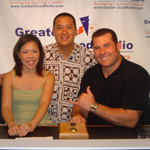 A certified serial entrepreneur, Kelly McGill’s business experience extends across the vast expanse of the Pacific. Kelly is the owner and part owner to a number of highly recognized Hawaii businesses including Tiki’s Grill & Bar, Nicky Shoe Company, Holokai Grill, and Grand Pacific Resources. He has worked in Australia and entered business ventures in Vietnam.

Tiki’s has already received numerous awards since its opening in 2003. Nicky Shoe Company, which Kelly runs with his wife Thao, has won several design awards and most recently was voted “Best of Honolulu 2006” by Honolulu residents. NSC is acknowledged as the only “boutique-style” shoe store in the State of Hawaii.

Travel played a big role in Kelly’s life. He has traveled to many parts of the globe, mostly in Asia. Kelly spent many years in Vietnam where he had a restaurant business named Café T & K, co-owned by a local.

Coming back to Hawaii, he put together Grand Pacific Resources, LLC under the guidance of Jim Hawkins. GPR has been helping government officials and business managers in Asia and the Pacific Rim make effective use of their technological and human resources.

Kelly McGill shares with us his oriental escapades and how his travels have helped him meet the demands of the business world with ease. Hear about his adventures and near-death experience and how these have dramatically changed his perception of life and career.

BIO:
University of Hawaii football fans remember Kelly McGill as a top offensive lineman for the Rainbows’ 1992 Holiday Bowl championship team. But he’s also an accomplished entrepreneur who has spent more than 10 years developing and maintaining contacts with government and business leaders throughout Asia and the Pacific Rim.

McGill earned his bachelor’s degree at the School of Travel Industry Management, then promptly put his education to work by moving to Vietnam, where he designed and implemented training programs, skills enhancement courses, and curricula for the government, foreign companies, and small businesses. For the past eight years, he has been helping government officials and business managers in that country, and around the world, make effective use of their technological and human resources, through Honolulu-based Grand Pacific Resources, Inc.

Currently, McGill spends most time working alongside CEO and Partner Bill Tobin of Tiki’s Grill & Bar LLC, which has numerous awards to its merit since opening in 2003. McGill is also the CFO and Partner for Holokai Grill which will open in the Outrigger Lewer’s Street Beachwalk project in 2006.

In addition to his work in the restaurant industry, McGill is also owner/partner with his wife Thao McGill of Nicky Shoe Company. NSC has won several design awards and most recently was voted “Best of Honolulu 2006” by Honolulu residents. Nicky Shoe Company is the only private label boutique style shoe store of its kind in the state. There are 2 locations at Pearlridge (opened July 2004) and Aloha Tower (opened May 2006).
McGill is also the former Chief Financial Officer of Maxletics Sports, LLC, which contracts with athletic organizations reconditioning and re-certifying sports equipment.

He is a board member of the Vietnamese Chamber of Commerce of Hawaii. McGill was also an owner of a restaurant-bar in Ho Chi Minh City, but sold his interest when he returned to Hawaii to be near his parents. He currently resides in Honolulu with his wife & daughter, Tre’Lani Mai and son Vegas Wade to be born as this bio is being written.

Prior to Tiki’s & other business ventures, McGill had worked for almost every company on the island while attending UH.