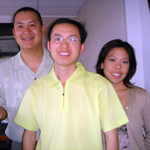 CEO of Zero2IPO, Gavin Ni, may be considered as one of China’s youngest and most successful entrepreneurs. Gavin started his venture capital firm at the age of 25 while taking his PhD. And although his business has put his further education on hiatus, it enabled him to build Zero2IPO into the most influential and active venture capital research and advisory institution.

Now at 32 years of age, Gavin Ni travels around the world to bring together Chinese and host country venture capitalists to establish entrepreneurial bonds in our increasingly globalizing market. Gavin gets the chance to fly to Hawaii and converse with our Greater Good Radio hosts, Evan and Kari, about his role as CEO and how he has built his company to be the most extensive venture capitalist and entrepreneur network in China.

Gavin shares with us how diligence and hard work as a student pays off as one begins to face the realities of building a career. Moreover, he says that networking through building a good relationship with the right people can help significantly in one’s future career.

“When you are in college you should be very diligent, hardworking; study hard to be the best student that you are,” he said. “But you should also keep an eye on the people side, if you have the chance you should network at first with investors that’s good for your future career.”

Listen now and know more about Gavin Ni as he talks about Zero2IPO and how entrepreneur’s in Hawaii can compete in our perpetually growing global connections.

Gavin is the Founder, CEO and President of Zero2IPO. In five years, he has built up Zero2IPO into the most influential and active venture capital research and advisory institution, as well as the most extensive venture capitalist and entrepreneur network in China.

Gavin was once the President of Tsinghua Entrepreneurs Club (TEC) in 1998-1999 and founder and chief organizer of Tsinghua Business Plan Competition. He also served as the Editor-in-chief of China Technology Magazine in late 1999.

Gavin was the active promoter of new economy, entrepreneurship and venture capital in China and has written and translated several books including “Digital Commerce” published by China Plan Press in 1998, an entrepreneurship Primer on Tsinghua Campus published by China Reform Press, “Venture Capital Tide” which was published by Guangming Daily Press in 1999, “Road to success” which was also published by Guangming Daily Press in 2000. Gavin was also invited to speak at many venture capital and hi-tech related events in Silicon Valley, Boston, Taipei, Hong Kong, Beijing, Shanghai, Shenzhen and other cities.