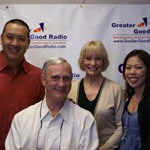 In this interview, Mark and Cheryl share how they have wound up in Hawaii, engaging in the cyclical world of real estate when they have left a heavy equipment parts manufacturing business in California all for the very same reason. This time around, the couple has been well equipped and fully prepared to face the uncertainties of new beginnings. And with the help of the community, the Richards have faced the challenges head on. Over time, they have built one of the most successful real estate firms in Hawaii.

Maybe it is the partnership, the kindred spirits, that guide Mark and Cheryl towards successful personal and business lives. They have been working together for more than three decades and their chemistry has worked on their favor.

“We’ve sat next to each other for 30 years now and everyone we know says, ‘How do you do this?’,” Mark said. “It’s how we met, it’s how we grew up together. So it’s the way we understand the world works; doesn’t work for everybody but it has worked for us really well.”

Listen now and find out more about Maryl Group and the Richards – only here on Greater Good Radio.

BIO:
Mark Richards
In 1970, Mark Richards founded Racor Industries, Inc., which has become the world’s largest producer of diesel fuel filtration systems. Growing to sales of $16 million in 1984, Racor was acquired by Parker Hannifin Corporation in 1985, then a $1.6 billion NYSE Fortune 500 Company. Mark continued as General Manager of the Racor Division through 1986, when he moved to a consulting role in Kailua-Kona, Hawaii and founded a real estate development company.

Mark Richards is the President and Chief Executive Officer of Maryl Group, Inc. From a three-person real estate development company, Maryl Group, Inc. has successfully expanded to become a company of statewide dimension that has earned an enviable reputation over two decades of real estate development, architecture, construction and sales and leasing of master planned communities, commercial centers, and custom residential homes.

Many developers grew up in the construction business. Maryl grew up in the manufacturing business where quality is measured in microns. The rigorous performance measures done in the manufacturing business are almost unheard of in the world of hammers and nails, but to those who work with Maryl, they have instilled a discipline and attention to detail that virtually guarantees superior results.

To Mark, people make the difference. Cliché, certainly, but equally certain is that people are the foundation and fuel behind Maryl’s extraordinary success. The consistent and surprising quality of each and every project, regardless of size or cost per square foot, owes to the dedication of what are unquestionably the most talented people in the islands. Mark’s culture for compassion and generosity rewards initiative and extra effort. His values have filtered through the hearts of his team members and are the fundamental reason for Maryl’s and his own excellent reputation.

In addition to his strong leadership and desire to aid his team members grow both professionally and personally, Mark makes the extra effort to give back to the community. In 2006, the Richards’ and the Maryl companies have donated over $157,000.00 to various Hawaii charities including Adult Friends for Youth, Leadership Kaua’i, and the University of Hawaii – School of Architecture, just to name a few.

Maryl is a family of dedicated professionals, delivering innovative solutions and services with integrity and quality that exceed our customer’s expectations. We are committed to improving the quality of life in our community.

Cheryl Richards
After moving back to her hometown of Modesto California from San Diego in 1978, Cheryl Richards began working with Mark at Racor Industries in Modesto as his Executive Assistant. In 1981 they married. During this time, Racor became investors in a construction partnership with a close friend and general contractor. They discovered they greatly enjoyed working together in design and construction. Having fallen in love with Kona while vacationing there, and realizing the opportunity for real estate development on the Big Island, they made plans to move to Hawaii following the sale of Racor.

In February of 1987 they moved to Kona, and with Cheryl’s sister, Janine, began Maryl Development. They decided on the name Maryl as a combination of their names. Cheryl Richards is Vice President and Secretary of what has now become Maryl Group, Inc. with approximately 250 employees. She works with every aspect of the company; working with the architects on design input, the finish materials and specifications selected for Maryl custom homes, and works with local designers in beautifully furnishing Maryl model homes, as well as Maryl offices on all islands. She is in charge of planning the annual family picnic, as well as the annual holiday employee appreciation party. She loves every aspect of her responsibilities with Maryl.

A significant segment of Cheryl’s schedule is involved in all company contributions, believing in the importance of Maryl giving back to the community. While contributing to the major needs of our state we also love supporting the keiki of Maryl employees in sports and special fundraisers. While sponsoring many endeavors to support the youth in our community, Cheryl is also currently involved in the start of donating her personal time to the Kapiolani Women’s and Children’s Hospital in Honolulu, which has affiliations on all islands.

With the marriage of Mark and Cheryl, together they have four children and eight grandchildren, which is a major source of pride and fun for them.

To both Cheryl and Mark, Maryl is a great source of pride and love. They believe in working hard, and having fun doing it! As a result it is a great place to work and for the second year in a row has been voted the number one employer in the state of Hawaii. This is because of each and every person that works at Maryl, it is not just a job, it is also family.