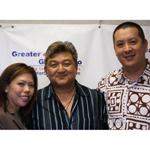 Ron Nagasawa joined then fledgling Midweek in 1984 as a sales assistant. Staying with the company for 24 years, Ron has seen the growth and development of the publication, which today has more than half a million in circulation. Ron stepped up as publisher in 2001.

In this Greater Good Radio interview, he talks about the beginnings of his career working for a foundation catering to disabled children in California. Moving to Hawaii as a teacher for the Department of Education, Ron has worked with special children, which touched his heart and taught him many valuables lessons in life.

Ron also talks about how he has landed the job at MidWeek. He shares how the publishing company enacts a community service—being an effective tool in disseminating information. He mentions the magazines Most Wanted in Hawaii issues, which has gathered a well-deserved applause from civic groups and anti-crime organizations particularly the Crime Stoppers.

“It’s really effective and I think one year we had a 100 percent capture rate but every year it’s really very high and we’ve received awards from Crime Stoppers for being an effective media,” Ron said. “In that sense again, it’s just really a tool by which we can help serve the community.”
Listen to this interview and find out more—only here on Greater Good Radio. Please visit www.midweek.com.

And have your copy of The Greater Good: Life Lesson’s From Hawaii’s Leaders signed today, November 17, 4pm at Borders Ward Ave.

Leilehua high school graduate, been with MidWeek since 1984 (23 years). Born in Honolulu in 1958 (currently 48 years old), military dependant (father was in the Army) so I’ve lived in New Jersey, California and Okinawa.

Have a mixed bag of occupations starting with picking pineapple in Wahiawa, worked for Foodland, Honolulu Book Shops and sold suits at McInerny Ala Moana. Was a certified Emergency Medical Technician with the City & County of Honolulu. Worked in special education for the DOE and was a councilor for the Foundation of the Junior Deaf and Blind in California.

Married (this year makes 20 years) with two children, an 18-year-old son who just graduated from Maryknoll high school and a 10-year-old daughter.