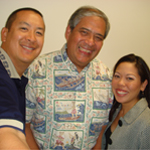 Dr. Jim Scott, president of Punahou School, may be described as a devout academe. After graduating from Stanford University in 1975, Jim joined the faculty of the Robert Louis Stevenson School in Pebble Beach, California, and rose through the school’s professional faculty ranks to become Academic Dean.

During his tenure at Stevenson, he earned an M.A. Degree in Private School Leadership at the University of San Francisco. After eight years at the Stevenson School, he entered Harvard University to work on his doctorate degree in Administration, Planning and Social Policy and earned his Master’s Degree in that field in 1985, and his doctorate in 1991. Jim was Headmaster of Catlin Gabel School in Portland, Oregon, prior to coming to Punahou where he has been tenured since 1993.

But getting in to the education sector was the farthest from Jim’s mind as a kid growing up in Hawaii.

“I thought I was going to law school after college,” he said. “As a kid, politics was my primary goal.”

This line of thought was born from more than a decade of involvement with the Punahou School.

“I think from the very beginning, this notion of public service was ingrained in me during my 13 years at Punahou,” Jim said. “It might have been the school programs, or my teachers and coaches—all of them seem to have lived fulfilled lives.”

Everything else seems to have just fallen onto their rightful place. It may be serendipitous that Jim landed the presidency of one of Hawaii’s premier primary and secondary education institutions. He is only the third president of Punahou School since World War II.

“It’s not a job you can plan for,” Jim remarked. “The position at Punahou opens every generation—there’s a lot of continuity, tradition, history, and longevity. “

In this foremost Greater Good Radio interview for 2009, Jim talks about the advantage of Hawaiians in the global setting. He said that there is something different and special about growing up in Hawaii and being exposed to a multicultural setting—a plus factor for president-elect Barrack Obama who once sat in class and mingled with classmates at Punahou School.