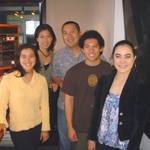 Punahou high school student River Kim, believing that he already has everything he desires, never asked for a present from his parents back in Christmas of 2003. Instead, he wanted them to give money to charity. But rather than writing a check, he came up with a much bigger idea of raising funds for charity—which became the birth of Malama Jam.

With the help of his father, Greg Kim, and a small group of classmates, River put together the charity event effectively raising $57000 gross for local charities, including IHS and Children’s Alliance, since its inception in 2004. On May 21st, River Kim’s brainchild will once again shine this time to benefit HUGS or Help Understanding and Group Support.

Greater Good Radio interviews Malama Jam founders, River Kim and Tierney Morikawa; and the organization’s PR Chair, Jackie Chang, as they give their thoughts and insights on community involvement and Punahou School’s role in providing their students a mindset geared towards public service.

“At Punahou, we are encouraged to reach out to the people in need,” Tierney Morikawa says, “Our school president always says, “To whom much is given, much is expected” and he has always instilled that in us.”

Meanwhile, Jackie Chang adds, “Our big message is not only for us to be successful in making a difference but to get the word out that kids can make a difference and to encourage other people to do an event of their own.”

This interview will definitely inspire parents and children to be more actively involved in giving back. Listen now and hear more about how a group of high school students are able to make a significant contribution to the community by empowering the youth through positive leadership.

BIO:
River Kim is a Junior and an honor student at Punahou School. River is the founder of Malama Jam, an annual benefit concert organized, conducted and performed by youth to help worthy causes. River and the youth team of Malama Jam have raised over $50,000 in their first two concerts, benefiting the homeless and sexually abused children in their first two years. The 2006 concert will benefit HUGS, a nonprofit that helps seriously ill children and their families.

River is a bass player in the Punahou Symphony Orchestra, and plays electric bass for an island music band called Auana. River also plays slack key guitar and piano, and enjoys music of all genres.

He is active in sports, as an All-League and All-State football player on Punahou’s varsity football team, playing both receiver and kicker. He also plays varsity basketball for Punahou.

Tierney Morikawa is a Junior at Punahou School. She has been a part of the Malama Jam team since the beginning, and she has worked in various areas of the event’s planning, including media coverage, talent, auction, and communications. Tierney enjoys doing community service, and she receives satisfaction from knowing that Malama Jam helps prove that kids can make a difference in the world.

Tierney also has a deep passion for the Hawaiian culture and hula. She has been dancing since she was two years old, and she has been with her kumu hula, Mapuana de Silva and Halau Mohala ‘Ilima for twelve years. She has participated in three Merrie Monarchs, and she is preparing to ‘uniki (graduate) as an ‘olapa (dancer) this summer. In addition to her involvement in Malama Jam and hula, Tierney plays the viola and participates in Ka Wai Ola—a club at school that publishes a bi-annual magazine of student poetry, prose, and artwork. She enjoys reading various styles of poetry and prose, because she finds that it inspires her own writing.