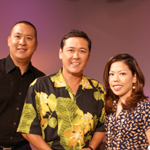 Stanford Carr has tilled the land from a very young age and gathered much knowledge as a vernal farmer. This early childhood experience would eventually reflect on his professional career as one of the most innovative and dynamic real estate developers in the state.

Today, Stanford is president of Stanford Carr Development, an acknowledged leader in the Hawaii land development industry. Stanford has founded the company in 1990 and has since changed the Hawaii landscape with his master-planned communities.

By early 2007, Stanford Carr Development would have completed over 3,000 homes with more than 1,000 new homes in development or under construction.

Stanford shares in this interview his story about growing up in Kula and learning about the basics of farming through neighbors.

At the age of 11, Stanford’s mother bought eight acres of farmland next to Kula Elementary School, where he met a neighbor named Herbert Kogan. Kogan would stand as his guide and mentor, and sponsored him to start a farm on their property. Stanford went everyday after school, and on weekends, to learn the ways of farming. In return, he would help out his neighbor and other farmers with their needs, displaying a true sense of Aloha in this sleepy part of the islands.

Born and raised on the island of Maui, Stanford Carr grew up surrounded by family and friends involved in every aspect of construction and development. In this environment, Carr sharpened his skills and developed his vision of island communities inspired by the cultural diversity and physical beauty of Hawai`i. Now, thirty years later, Stanford Carr’s passion for excellence in architectural design and quality can be found throughout the islands.

Since it was founded in Honolulu in 1990, Stanford Carr Development has become an acknowledged industry leader in creating distinctive and successful communities through innovative site planning, diversity in architectural design and product types, environmental sensitivity, and the use of cutting-edge technology and building materials. By early 2007, Stanford Carr Development will have completed over 3,000 homes with more than 1,000 new homes in development or under construction. Stanford Carr is one of the most dynamic real estate developers in Hawai`i today.

Stanford Carr has consistently delivered award-winning homes to the island communities of Oahu, Maui and the Big Island garnering 11 Western National awards and 46 local BIA awards. On his island home of Maui, Carr’s very first development, included Pukalani Fairway Estates, won “Best in Show – Neighbor Islands” in the 1992 Building Industry Association Parade of Homes. Most recently his Kulalani at Mauna Lani on the Big Island won “Best in Show – Neighbor Islands” in the 2006 Parade of Homes. Carr attributes his developed eye and appreciation for the choreography of design with arts, architecture and interiors to his mother.

Best known for The Peninsula at Hawaii Kai and Colony at the Peninsula on Oahu, Waikoloa Colony Villas, Kahakai Estates, and The Fairways at Mauna Lani on the Big Island, and the master planned community of Kehalani and Wailea Fairway Villas on Maui, Carr’s quality communities are reflective of a complete and thoughtful approach to the lifestyles of future residents and the homes they are looking for.

Always mindful of the needs of the community as well as the real estate market, Carr’s master-planned communities include residential and commercial components as well as community parks and recreation areas. Over ten years ago, Carr created a unique opportunity for Oahu residents looking for more affordable housing with his award-winning communities of Kekuilani, Village 4 and Iwalani, Village 5 at Kapolei. These new and well-designed homes offered modern amenities and charming character at affordable prices.

Giving back to the community is a core value of Carr’s corporate philosophy. Currently he is involved as trustee of the University of Hawaii Foundation and has been reappointed to an additional nine-year term. He also sits on the Board of Directors for Enterprise Honolulu, Hawaii Theatre for Youth and Youth at Risk. Carr is also a member of the Building Industry Association of Hawaii and is actively involved in developing the new BIA Training Center. In the past, Carr served on the Political Action Committee Trustee-Government Affairs Committee, as a director of the Hawaii Developer’s Council and as a member of the Governor’s Advisory Board for the Department of Hawaii Homeland.