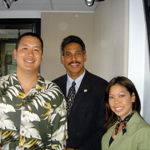 Peace and order are effectively maintained with the presence of individuals like Lt. Gov. Duke Aiona at the forefront in the battle against illegal substances. In the mid-90s, prior to becoming lieutenant governor, Duke Aiona was appointed as Administrative Judge of the newly created Hawaii Drug Court, which to date remains as one of his most fulfilling achievements.

Now, as second in line to the State governor, he continues the fight for a drug-free community through educating the youth about the dangers of illegal drugs and, not to mention, underage drinking. In 2005, he unveiled the Hawaii Drug Control Plan outlining the Administration’s goals and strategies in addressing substance abuse issues. With this in mind, Lt. Gov. Duke Aiona is truly a figure Hawaii cannot be without.

In this interview, Lt. Gov. Aiona brings us to the very roots of his legal and political career, and how he has become one of the most powerful political figures in the State of Hawaii. He talks about his transition from being a judicial entity to a public servant.

“What you do, what you say is always scrutinized and you’re always asked for your opinion and so your opinion makes a difference,” he said. “And it’s not difficult in the sense to answer it but it’s difficult in a sense that it had never happened before so that all of a sudden what you way will also impact people.”

Listen now and find out more about Lt. Gov. Duke Aiona’s current challenges and future plans for the State of Hawaii.

BIO:
James R. “Duke” Aiona, Jr. is Hawai`i’s Lieutenant Governor. He was born in Honolulu in 1955. After graduating from St. Louis School, he went on to attend the University of the Pacific in Stockton, California. In 1977, he graduated with a Bachelor of Arts in Political Science. He knew he wanted to return home to Hawai`i and help make a difference in the lives of its people. That year, he began his studies at the William S. Richardson School of Law at the University of Hawai`i’s Manoa campus.

After graduating from law school in 1981, Lieutenant Governor Aiona started his legal career with the Department of the Prosecuting Attorney of the City and County of Honolulu. After two years as a Deputy Prosecuting Attorney, he was appointed to the Career Criminal Unit. His work at this specialty unit included prosecution of career criminals, from the initial indictment all the way to trial.

His next legal position was also with the City and County of Honolulu. As a Deputy Corporation Counsel in the Litigation Branch, he defended property, personal injury, contractual and other claims filed against the city. In his third year on the job, he was appointed Litigation Branch Chief, with administrative and supervisory authority over matters such as personnel and budget.

In 1990, Lieutenant Governor Aiona was appointed to the State Judiciary, which marked a new phase in his career. He first served as a District Family Court judge. In his role, he presided over many divorce, domestic abuse, and juvenile crime cases. Seeing these domestic problems firsthand strengthened his conviction that the family unit is the foundation of society. This philosophy would continue to have a profound influence on his personal and professional life.

In 1993, he was elevated to the Criminal Division of the First Circuit Court on Oahu where he presided over jury and non-jury matters, which include some of Hawai`i’s most high profile criminal trials. In 1996, he was appointed Administrative Judge of the newly created Hawai`i Drug Court. Serving as the first judge of the highly praised, innovative Drug Court remains as one of Lieutenant Governor Aiona’s most fulfilling achievements.

Lieutenant Governor Aiona is also a dedicated family man, and community and church leader. He has received constant strength and support from his devoted wife Vivian and their children Makana, Ohulani, Kulia, and Kaimilani. He has served as a committee member of the Corrections Population Management Commission and the Advisory Committee of the Hawai`i Drug Court. The Lieutenant Governor also has been selected to serve on the SAMHSA Advisory Council. This is a prestigious position, as this Council advises the federal Substance Abuse and Mental Health Services Administration regarding policies and trends affecting the delivery of treatment and prevention services to those in need.

For many years, Lieutenant Governor Aiona has also advocated physical fitness and extracurricular athletics as part of a healthy, well-rounded lifestyle. He was a past volunteer coach for the Makakilo Youth Baseball League. Since 1990, he has been a volunteer coach and referee for the American Youth Soccer Association (AYSA) boys’ and girl’s teams. He also currently serves as assistant coach for St. Louis School Division I Varsity Basketball. In addition to athletics, he also cares deeply about the education and future of Hawai`i’s children. He was a Maryknoll School board member from 1995 to 1998. In 2003, he was designated Hawaii’s representative to the Leadership to Keep Children Alcohol Free National Coalition, as well as Honorary Chairperson of the Hawai`i Children’s Trust Fund 2003. Most recently, Lieutenant Governor Aiona was selected as the Saint Patrick Community’s 2003 Honoree for outstanding leadership and community service and continues to serve as a Honorary Chair on many other charitable events and organizations.