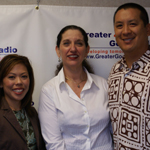 Leah has been involved in the music industry since she was 12, helping out with tons of paper work at the tremendously successful Dunhill Records. Leah has become a crucial instrument in the promotion of Hawaiian tunes to the rest of the world.

Leah quickly learned and absorbed the spirit of Hawaiian music having been trained in the wild environment of the entertainment business in Los Angeles. However, for her the learning process involved leaving behind a mentality of superiority over the islanders.

“No one really ever lasts that thinks that they can teach Hawaii how to do it, whatever it is,” she says. “Whatever business it is, whatever you’re trying to get done.”

“I think the best way to communicate is to fit in to the culture you’re in and see what advantages you’re bringing to the table for the other party. It’s a win-win,” she adds.

Evan and Kari Leong talks to Leah Bernstein about her career in the music industry, her experience with Hawaii’s premier recording company, being a female corporate leader, and working as a staunch advocate of Hawaiian music.

Hear more about her and Mountain Apple’s community involvement, and the wonderful array of talents they have served through the years—only here on Greater Good Radio.