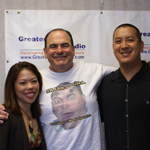 Frank De Lima is one of Hawaii’s most celebrated comedians. Frank has won the coveted Na Hoku Hanohano Award for 11 of his 13 comedy albums. He founded the Frank De Lima Student Enrichment Program in 1980, a non-profit organization devoted to providing a better future for Hawaii’s students.

His organization aims to help Hawaii’s students understand the importance of reading, studying, laughing, and family, and managing major emotional and physical life transitions. Frank visit 350 schools biennially since the programs birth. Frank has received numerous honors, including Governor Cayetano’s Kilohana Award for Volunteer of the Year and the Ellison S. Onizuka Memorial Award from the National Education Association.

In this Greater Good Radio interview, Frank talks about his career and its stem from his early childhood days as an entertainer to his family. We also get to learn more about his non-profit organization and the inspiration behind its foundation.

We hear about the long-term results of his school visitations, doing stand up comedy, talking to students about a myriad of aspects in life, and influencing them to become outstanding citizens of the world.

Listen to this interview and find out more.