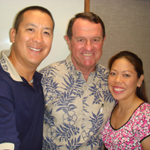 Clinton Churchill’s personal and professional experience spans industries and geographies, and he uses this eclectic background as a tool to reach out to the community.

A former commander of the Hawaii Air National Guard, Clint-who moved to the Islands with his wife 39 years ago-sits as trustee to The Estate of James Campbell, an organization administering the assets held in trust under the will of James Campbell. He is also a Board member for the Bank of Hawaii and Hawaii Pacific Health, and an Executive Board Member and Past President of the Boy Scouts of America – Aloha Council

After retirement from the Air National Guard 12 years ago, Clint set up Acroflight Inc., an extreme air-tour company.

Clint’s formula of work-life balance blends well for the 65-year old. Despite the demands of his career, he is still able to a lot time for himself, and more importantly, spend time with his family.

“Life is about priorities,” he said. “You have to figure out what you want to do and where your opportunities are-how to balance the different demands on your time.”

“Family comes first,” Clint added. “With family is really yourself.”
In the middle of it is a health-centered lifestyle which has helped him cope with the rigorous requirements of being a fighter pilot.

“Exercise has always been important,” he claimed. “Having an active life means being healthy.”

“I found out that if I don’t get to exercise as much I have less energy.”

An ethic of community service, the opportunity to serve, allowed Clint to move from organization to organization and experience different aspects of life. Clint became involved early on in the Special Olympics and in healthcare through the Kapi’olani Medical Center, amongst countless others.

“Be engaged. Be passionate about what you’re doing. Be committed.” Clint advised. “If you’re called on to do something, carry it through.”

In this interview, Clint shares his experiences as fighter pilot and subsequent commander of 154th Wing of the United States Air National Guard. He also talks about the values he has acquired as a military personnel which he uses to this day as a social entrepreneur.

Listen to this two-on-one conversation and find out about Clint’s career beginnings and what brought him to Hawaii and eventually become guardian of the skies as an Air Force pilot-all these and more only here on Greater Good Radio.