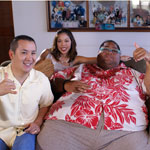 Born Saleva’a Fauali Atisano’e, Konishiki Yasokichi was the first foreign-born sumo wrestler to be named champion or Ozeki. Konishiki won his first 11 matches as an amateur athlete in the Japanese sport. He left after more than 15 years with the Sumo Association and started his own business as a marketing professional, publicizing his persona through television. Konishiki has appeared in several TV advertisements for Japanese companies and products. He is also an established recording artist, debuting in the music scene in 2000.

All of Konishiki’s successes are put in to good use as he strives to uplift the lives of not only his family and relatives but also the hundreds of children who are on the verge of losing hope at such a young age. Konishiki founded the Konishiki Kids Foundation to mentor and guide disadvantaged children towards the right path. One of the main philosophies that the foundation wants to put forward is the idea that children have a “choice”.

“One of the challenges is making people understand the same situation that I went through that they are going through right now,” Konishiki says. “I tell the kids that everyone makes a choice and making choices either take you were you, it can be good or it can be bad.”

“A lot of us are struggling but yet we make our choice to even struggle and work towards greatness,” he adds.

Evan and Kari interview Konishiki Yasokichi and share with us a story of hope and optimism. Konishiki talks about his childhood days growing up in the “west side” of Oahu as a less-privileged kid. Stereotyped as crooks, he and his friends were able to change other people’s perception about them through diplomatic means. Eventually, Konishiki and his peers were everyone’s friends in the community.

Listen and find out more about Konishiki’s rise to the top, albeit full of hardships, nonetheless all worth it, and how faith and family play an important role in his life endeavor.